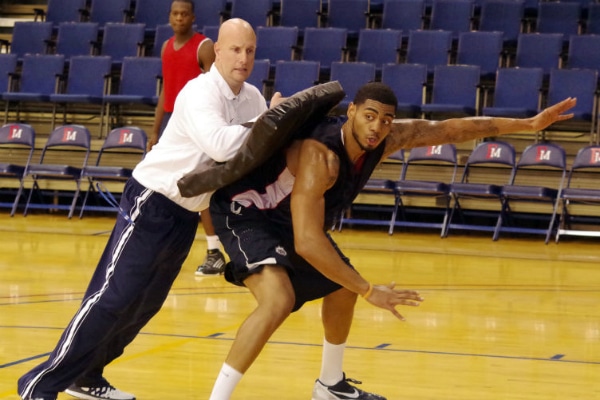 The best basketball post players know that the battle in the paint starts long before the ball is entered. It starts with fighting for position and then holding that position long enough so that the ball can be delivered in for the finish at the basket.

Sometimes fighting for post position means that the post player doesn’t even get the ball, but that an open lane to the basket is created because the post defender is sealed off by a great post seal. Either way, one thing is clear, post players that can master the post seal in basketball create a lot of value for their team.

This skill development basketball coaching article will break down the critical components to mastering the post seal in basketball and will provide four great game situations for using a post seal.

It is not all about being the biggest and strongest, and most of the time, the offensive post player will be going up against someone that is their physical equal. What it really comes down to is your timing and technique. Let’s use a simple example to help us think about the importance of timing.

There are even basketball coaches that teach their post players to put their hands on their knees to fake fatigue to get their defender to relax before ducking in hard for a post seal. To be great at ducking in on a post up, you must be able to master timing.

The other part of timing is making sure that someone can feed you the ball quickly once you do duck in. You will not be able to hold your great positioning forever, so you need to time up your duck in so that you can receive the ball right when you duck in or very shortly after.

Also, if you are posting up in the paint, you don’t want to have to wait too long for the ball because it could lead to a three-second violation.

If you have great technique, you will be able to post up and seal defensive players that are bigger and more athletic than you. It will also really help give the post-entry passer a great target and will also allow you to create a much higher finishing opportunity once you do catch and turn to finish. Creating a quality passing angle is critical. Not every point guard or wing player is a great passer, so the better angle you give them, the higher percentage the pass will be.

Here are two great basketball training videos breaking down the duck in and how to old the post seal.

How to do a Duck In Basketball Move

How to do a Baseline Duck In Basketball Move

Off the Ball Spacing Away from the Post Seal

Without great off the ball spacing from the other four basketball players on the floor, it is tough to enter the ball into a player even on a great post seal. The reason is that the off the ball defenders can sink in and help without the threat of being burned by the player they are guarding.

However, if there is excellent spacing and player movement off the ball, defenders must choose between letting the ball be entered into the post or helping and giving up an open shot. It is essential that great spacing is kept on the floor.

Several different situations can allow for a great duck in opportunity in basketball. The sooner a post player can recognize them, the better they will be able to time up their duck in and seal for great finishes or driving lanes to the rim. Here are four excellent game situation options to use the post seal in basketball.

Going back to talking about timing, this type of situation is all about timing and anticipating the ball moving around the arc. The post player must be patient with their duck in and time it up with the ball movement as the ball is swung around the perimeter. They must time up their duck in with when the entry passer is about to receive the ball. One of the reasons this type of action works so well is that the post defender wants to be in the weak side help when the ball is on the other side of the floor.

If the ball is swung around the arc quick enough, the offensive post player can take advantage of great positioning and catch the defender too far up the lane line in defensive help position. If done correctly, this will lead to an easy seal, entry pass, and finish.

This all goes back to timing and angles, though. If you duck in too early, the post player will be able to fight over the seal. If you duck in too late, the post defender will already be back in a good guarding position, and the angle will not be very good. Timing is the key for this type of duck in action.

In this type of situation, the post player wants to do an excellent job of making sure that their seal is high enough up the lane so that the passer can lead them to the basket with the pass. The closer the seal is to the basket, the harder the pass is because of lack of space.

One of the best times to post seal in basketball is in transition, especially if the post player can really run. The term is called “rim running,” and it will require the offensive post player to run right down the middle of the floor to the front of the rim. At this point, the offensive player has two options. If the post defender is in front of them, they will look to bury them under the basket with a great duck in and post seal.

Transition post seals in basketball work so well because there is rarely ever any off the ball help. Wing defenders are so worried about running back to find their man that they cannot help on the entry pass. This is a great way to take advantage of early offense and get some easy finishes at the basket.

There are times when a great post seal doesn’t end up with a bucket for the post player. Instead, it opens up a wide-open finish for the penetrating guard attacking off of the dribble or a hard cut. Being aggressive with the post seal keeps the post defender engaged and creates a legal moving screen action for the guard to attack the basket.

You mustn’t over-exaggerate your post seal and pick up an offensive foul, but a great way to keep a shot blocker out of the play is a hard duck in and post seal.

Having a post player that can take advantage of post seals in basketball can add so much value to a team and a post player’s ability to score. It is great to have size, but there have been plenty of undersized post players over the years that have made a killing mastering this action.

Players like Charles Barkley, Zac Randolph, and many others mastered the post seal in basketball and then took advantage of post defenders bigger and smaller than them. Spend the needed time mastering this action, and it will change the offensive post forever.