Becoming a Great Rebounder in Basketball 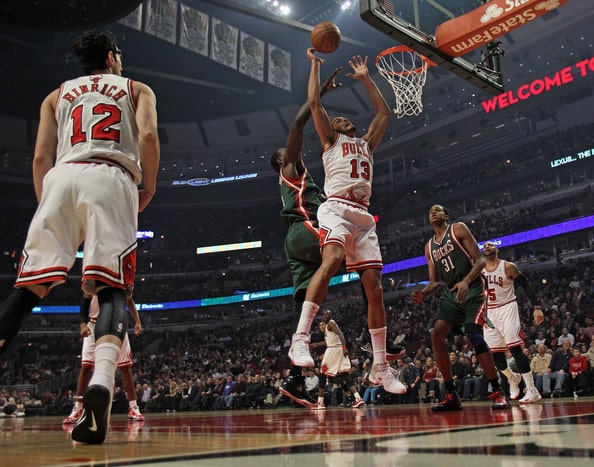 When you think about great rebounders in basketball, the top players that probably come to mind are Kevin Love, Joakim Noah, Dwight Howard, and a few others. What makes these guys so good at rebounding the basketball? Size and athleticism can help in rebounding, but there are lots of players that are 7 feet tall and others who can jump out of the gym that aren’t good rebounders. So if that is the case, then what goes into becoming a great rebounder?

This basketball article is going to explain some of the things that go into becoming a great rebounder. So whether you are a player learning how to rebound, or a coach teaching their team, this article is for you.

Desire to Rebound the Basketball

The first and most important thing that goes into being great at rebounding is desire. It doesn’t matter what you are capable of if you aren’t willing to be tough as a basketball player and work to rebound. You have to want it more than anyone else on the court.

Rebounding the ball is such a big part of the game. A defensive rebound ends the other team’s possession and allows your team to transition to offense. If you can throw a good outlet pass off of the rebound, it can end up in an easy bucket for your team. An offensive rebound gives your team another possession, which means more chances for your team to score. Winning teams have players that have bought into the value of rebounding.

Having the right technique is another big factor in being a great rebounder. It is critical that you don’t try and just out jump or out tall everyone for the rebound. You see many players doing this, but against other good rebounders, this will not work. Every time the ball goes up, hit your man with a solid box out, and then pursue the ball.

If your man has an inside position on you, then try to ride him under the basket so that he doesn’t have a good angle to rebound the ball. If your man is behind, find him with your forearm, turn, put your butt/hip on them, and keep your arms up and out. Stay low and strong on your box out, and don’t let your man ride you under the basket.

When you release to grab the ball, try and grab it at its highest point, and then bring it down and chin it. You must be strong with the ball.

On the offensive end, if you are trying to board, you can try the strategy of riding your man under the basket and a couple of other moves. The first thing you can try is the “swim” move. When your man goes to box you out, fake like you are going one way, and then cut back to the other side. As you cut back, bring your inside arm down on his arm and sweep by him. Think of a swimming motion as your arm raises and then pushes down through the water.

The other move that you can use is the spin move. When your man goes to box you out, fake one way, spin-off of his box out, and try to get inside position for the rebound. Without fouling, do whatever it takes to get the offensive board.

First to React to the Rebound

When the ball comes off the rim, you have only a split second to figure out where it is going, release, and then track it down. Great rebounders have a nose for the ball and are somehow always around the ball. If you can see or predict where the ball will bounce before your opponent can, you will have an advantage.

This skill comes from watching games, playing in games, and doing basketball rebounding drills. As a rule of thumb, though, long shots equal long rebounds. The majority of baseline misses hit off the rim and go long. On offense, if you crash hard and track down the ball, you will have a good chance of coming up with the board.

When doing basketball drills where you are the rebounder for a shooter, it is great practice to study where the ball misses depending on where the shooter is shooting from.

Sometimes getting the rebound comes down to whoever wants it more. You have to be a monster inside and think to yourself that every miss is yours. Don’t think, “maybe one of my teammates will get it.” Take it upon yourself to get every rebound. This is one of the few times in basketball where it is good to be selfish.

When your opponent comes in hard to rebound, hit him with a strong box out a couple of times, and guaranteed, he won’t come in as hard after that. Make sure that the other team knows that you own the paint and they are not getting any free rebounds in there, be a beast on the boards.

You don’t have to bigger, stronger, and jump higher than everyone else to be a great rebounder. However, you do need to work at it and want the ball more than anyone else on the floor. Being a great rebounder adds value to your game as a player. This will result in more playing time, and if you are really good, it could result in a paycheck. Keep working and continue to get better every day.