Recruiting With Less in College Basketball 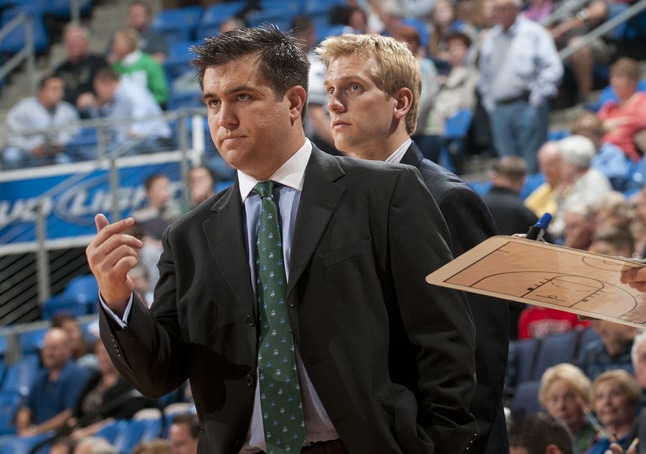 The basketball coaching article was written by USC Upstate Associate Head Coach Kyle Perry. He has been with the program for 6 years (14-15) and has been a big part of the team’s recent success. Coach Perry also spent some time at South Carolina State, College of Charleston, and several other programs. He is one of the top mid-major recruiters in college basketball today.

Over my fourteen years in coaching college basketball, I have learned how to be successful in recruiting with less. During that time, I have been very fortunate to have learned effective approaches from some of the best basketball coaches in the game. Two important lessons that these coaches taught me are to trust myself and think outside the box. Armed with this advice and hard work, I have been very fortunate to have enjoyed success in recruiting for four different basketball programs.

Approximately 218,000 students compete in high school boy’s basketball programs throughout the United States. With this number of basketball players in the US and international student-athletes, a wide range of prospects are available for consideration.

However, the number of prospects also presents the difficult task of working your way through who represents the best fit for your individual school and Head Coach. We obviously take advantage of all our connections to identify and locate potential prospects.

With limited basketball recruiting resources, I am compelled to spend hours working the phone, evaluating countless kids on tape, and taking long car rides to see and meet some of them. Comparing and contrasting a multitude of different prospects allows me to make good decisions about whom to actually sign to a scholarship.

Nonetheless, being at a mid-major school doesn’t always translate into instant credibility with prospects despite having had a noteworthy record of sustained success. I never lose sight of where I am and what resources are available to me. It is amazing to witness the number of prospects and their parents who get caught up in certain factors of consideration such as gym size, what shoe the program wears, etc.

I love to recruit blue-collar kids who can play. These kids typically care about only two things, working to be as good a basketball player as possible and WINNING!!! The gym size, the shoe, the conference are of no consequence to these kids. To them, it is all about opportunity.

It often requires a gutsy decision to recruit these types of kids who don’t always have a star beside them or play for a premier AAU program. We are all aware that certain levels of quickness, athleticism, strength, and knowledge are needed to play college basketball.

Thinking Outside the Box

In many cases, I think basketball coaches miss on particular kids because they place too much emphasis on the WOW factor. In the process, they overlook the ability to pass, catch and shoot, etc. The outside-the-box recruiting to which I previously referred is exemplified by a young man currently on our team at South Carolina Upstate.

He played two years of college football before signing with us. No one was recruiting him for basketball because he expressed an exclusive interest in college football. When I saw him play in high school, he could pass, catch, shoot, and was a tough basketball player. I told him that if he ever changed his mind and wanted to play basketball, South Carolina Upstate would welcome him as a player. During the winter of his sophomore year, he called and stated that he was ready to play basketball. He is now one of our starting forwards.

We have gone head to head in recruiting several prospects, but I always hold true to the statement of “know when to hold them and know when to fold them.” As in the case of a significant number of our recruits, they may have been under-recruited or not even recruited at all. In trusting my ability to know who the right prospect is, I have been fortunate to have signed three conference players of the year within the last six years.

Some very good players are responsible for the 78 games in the win column here at USC Upstate over the last four years. This noteworthy level of success has occurred because we trusted our ability to know who was the best fit for our basketball program and effectively used unique recruitment strategies in response to limited resources.