Mastering the Shot Fake in Basketball 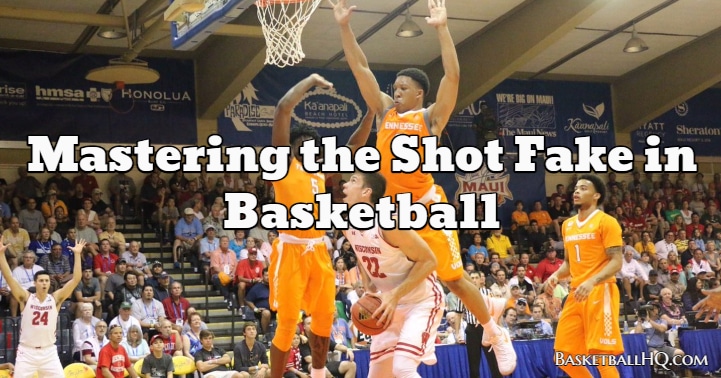 One of the most overlooked characteristics of any good offensive basketball player is efficiency. Webster defines efficiency as “the ability to accomplish a job with a minimum expenditure of time and effort.” For any offensive player in basketball, the “job” at hand is to score.

A coach’s worst nightmare is the proverbial “volume scorer” who we all know may score a lot of points but usually doesn’t quite translate into the formula of winning basketball games.

This is where being efficient and creating easy scoring opportunities against a high-level defender with “minimal time and effort” becomes such a valuable commodity.

In my experience, I would put the shot fake in this unique group of “efficient weapons” that are often unintentionally disrespected by players and basketball coaches alike.

Often in our attempt as coaches to build up our individual offensive progression, we are quick to incorporate a shot fake into our basketball skill development workouts without taking the time to properly teach it and correct it.

If we do happen to initially teach the shot fake correctly, in an attempt to get a maximum number of repetitions, we sometimes allow bad habits to creep back in. By doing either one of these things, we limit and often eliminate the benefits of the shot fake. Like any other skill, we must pay attention to each detail and be sure that it is practiced and repeated perfectly every time.

Let’s cut to the chase. Great basketball shooters will always have the leg up when it comes to the shot fake. After all, the effectiveness of the shot fake is directly correlated to the threat of that player making shots.

By definition, a good shooter makes shots. Similarly, a good shot faker gets his or her defender out of their defensive stance. That is the mission and is ultimately the determining factor of whether or not the shot fake was successful. However, more goes into the execution of the shot fake that must be taught, repeated, and carried over to live-action.

So what does the perfect basketball shot fake look like?

1) Shows a shot and looks just like a shot except for the release!

The same footwork that goes into a perfect basketball shooting motion (knees bent, back straight, stationary feet, etc.) is required to sell a perfect shot fake! Having your eyes locked on the target and using your head and shoulders to simulate the shooting motion.

Selling your shot is critical in attempting to gain an angle or timing advantage on your defender as you begin your scoring move.

The ultimate goal of a basketball shot fake is to force the defender to get out of their defensive stance. Raising the ball in a shooting motion anywhere from six to eight inches in a “shot-like” fashion and without any wasted movement is critical in attempting to sell the shot! The fake itself must be quick and executed at a game like speed in an attempt to look like a game-like shot!

3) Creates a scoring opportunity by forcing a decision to be made!

When executed properly, the defender is forced to react. It is important to remember that there is no limit on how many shot fakes can be used consecutively! Use multiple shot fakes if there is any confusion as you begin to read the defender. This will allow balance and comfort to be regained.

The offensive basketball player is always in control and must never allow themselves to be sped up by the defender. Once the shot fake gets the defender out of their stance, the reading begins. Once the read is made, having a progression of scoring moves off the dribble from this point is crucial. But remember to always work on keeping it simple and keep it to three dribbles or less!

The cardinal sin of a shot fake is to follow it with a “false step!” Attack the defender “shoulder-to-hip” and make an aggressive scoring move towards the basket. “Shoulder to hip” is the teaching point in an attempt to put the defender “in jail” and take them out of the play.

5) Passes the balance test by being able to execute the “Shot-Fake-Shot!”

If the defender stays on their feet and does not go for the shot fake, it is then up to the offensive player on how to proceed. Obviously, it is always about making the right basketball play, and in this case, it may be to simply reverse it or pass the ball to an open teammate.

However, if the defender takes a retreat step of any kind, the offensive player can execute the “Shot-Fake-Shot” (which is just like it sounds – shooting the ball immediately after the fake itself). After all, a shot fake is only considered perfect when it passes this final test.

Teaching the Shot Fake in Basketball

It is important that we, as basketball coaches, continue to break the game down into pieces for our players. Each piece and every detail of the game is crucial and can help our players become more efficient on both sides of the floor.

If it’s not perfect, fix it! Teach it. Drill it. Demand that it be executed perfectly! Don’t let another day go by allowing such a powerful offensive weapon to be disrespected in your basketball program!