Game Shooting and Charting in Basketball 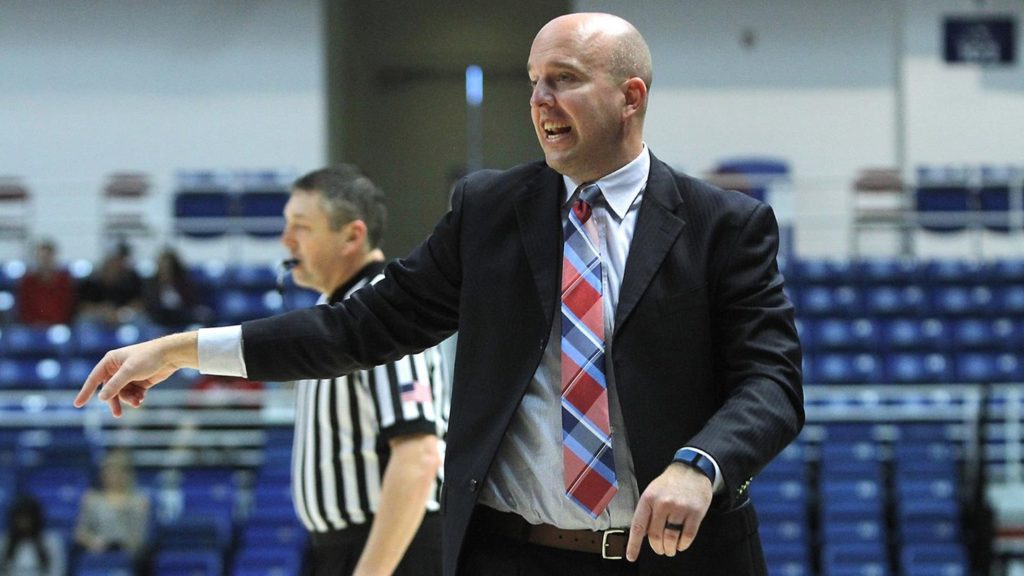 This article was written by University of Evansville assistant coach Matthew Graves.

In thinking about writing a basketball coaching article on enhancing practice shooting, I believe several areas can be considered for improvement both as a basketball team and an individual. Obviously, a quick google search will lead a coach or player to countless basketball shooting drills and videos that can be used to aid in performance. I will discuss a couple of my personal favorites later.

However, no matter what basketball shooting drills you utilize, I think shooting proper shots while going at game speed and charting the results are ultimately the key ingredients to seeing improvement.

The first area I would like to discuss is how much information can be taken from adequately putting in the time to chart your results accurately. Below is a sample excel spreadsheet from a team summer basketball shooting drill. 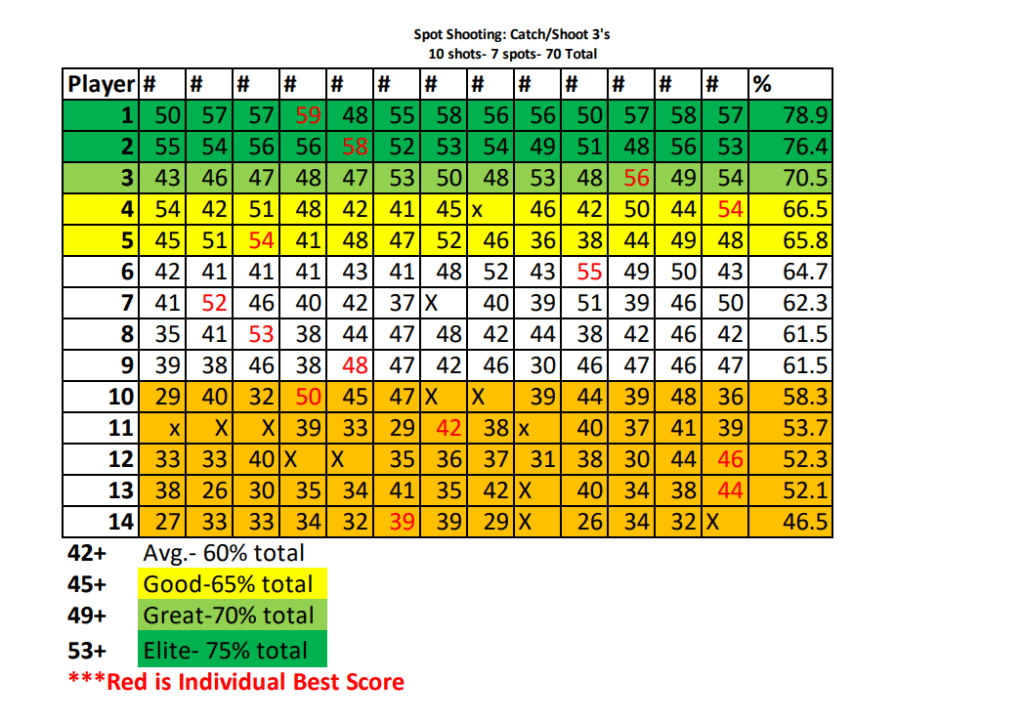 Five items that can be gathered from the chart:

We would post this basketball shooting chart after every time we did this particular shooting drill. The amount of communication among teammates was awesome to witness.

This simple concept can be taken to almost any type of basketball shooting drill. The amount of time it takes to put together and chart these shots is well worth the benefits.

My suggestion would be to have a couple of different basketball drills to utilize to create this competition for the entire team. Also, changing up the drills from Spring, Summer, and Fall makes it more enjoyable for the players.

There are many great basketball shooting drills out there, and you may already have some in mind, but if you need a couple of ideas, here are a few of my favorites. These are great shooting drills for game-specific shots and also for charting.

The shooter will be able to shoot from wherever they want (you can decide midrange or three). They will have five minutes to make as many shots as they can.

Again, many basketball drills can be utilized but, keeping accurate track of results will significantly impact a shooter’s improvement.

This same concept of charting can be used for an individual basketball player as well. You will be able to see a player’s progress and what types of shots they like, and where on the floor that they shoot best from. 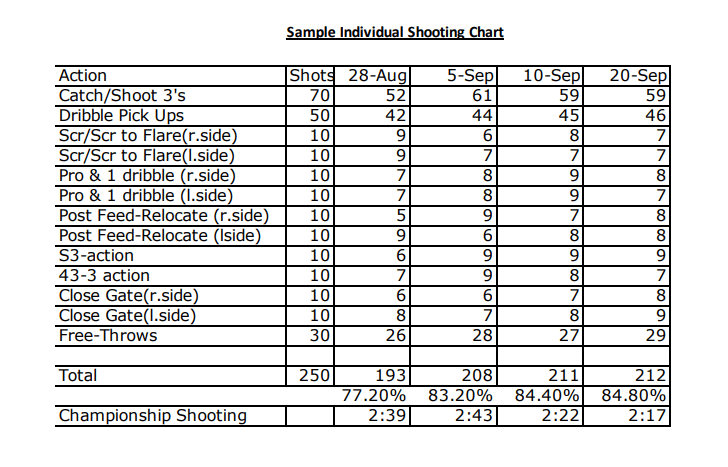 I enjoyed this part of my job as an assistant basketball coach while at Butler University. We would have 2x per week that we would have one on one instruction. This was an opportunity to get better with an individual player and help build a great relationship and trust.

These basketball workouts were designed to shoot game-specific shots at game speed. I am a big fan of doing combo shooting reps. The combos can be done in 2,3,4,5 shot sequences and repeated.

In the case of the sample attached, I did a two-shot combo repeated five times. The focus was on utilizing the same footwork/technique on each shot while going at game speed. This was also a great way to work on conditioning while developing a basketball skill.

Also, when I had another player with a similar ability, creating a competition utilizing the same basketball workout was a lot of fun. The attached workout was one day of shooting for Kellen Dunham. I also worked out Rotnei Clarke using the same workout, and then both of them would have friendly trash-talking of who the better shooter was in those basketball drills and pushed each other to get better.

As a side note, it was incredibly easy to rebound for both of these guys as you simply stood under the net!!!

When it comes to improving basketball shooting in practice, it is critical that you record your progress, shoot at game speed, and make shooting a healthy competition between the team and individuals.

Great basketball shooters want to be challenged constantly, so developing points, time, different shot combo’s that are charted and challenged can only enhance a player’s performance.