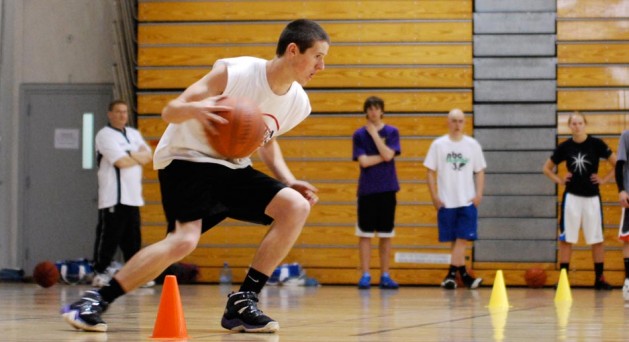 There are basketball drills for all types of purposes. Some are used to improve a specific skill like basketball shooting form. Others might be designed to work on hand-eye coordination, and so on. Basketball conditioning drills are a little bit different, though. They are going to work on multiple skills at the same time. They will teach the player to be able to execute a skill or several skills while also working through fatigue. Basketball players need to think and function even when they are tired; this is called “mental toughness.”

This type of stuff is critical for late-game situations when a player is running out of gas, and they must be able to push through mentally and execute a play or get a stop on defense. Many games are won and lost because of mental toughness or the lack of it. Tough-minded basketball players can do what needs to be done regardless of fatigue.

Conditioning basketball drills also do a great job of maximizing gym time. With traditional conditioning, you are spending time running sprints or doing some form of conditioning without a basketball in your hands. However, with basketball conditioning drills, you are working on different skills like ball-handling, rebounding, etc., while also improving conditioning. It keeps the basketball player(s) engaged both physically and mentally while improving both skills and conditioning.

Here is a list of some great basketball drills broken down by category that will work on a specific skill(s) while also challenging the player’s conditioning.

As a shooter begins to get fatigued, they start allowing themselves to shoot the basketball with bad habits. They might not shot prep the right way (footwork/down ready), get enough lift on their shot, hold their follow-through, or one of the other important basketball shooting details that go into a high percentage shot.

In a game, you can’t stop to point this out and correct it, but during basketball training, you can put a player through different basketball shooting drills that focus on conditioning. And as they go through the drill, you can emphasize the importance of shooting the basketball the right way every time. It takes great mental discipline to be able to do this when a player is tired, but there is no better time to work on it than when in training.

To become a great ball-handler in basketball, you MUST get out of your comfort zone, and a great way to do that is with conditioning basketball drills that focus on ball handling. Some are going to work on being able to make a variety of moves at a high pace, while others will focus on being able to handle the basketball and process information at the same time.

Rebounding the basketball is all about execution and effort, and at the end of a game, both begin to suffer if a player does not stay locked in mentally. These rebounding conditioning basketball drills will allow the player to be able to train at a high speed and fight through fatigue as they battle on the boards. This will directly translate into late-game situations where a player must fight through fatigue and continue to battle on the boards.

Playing defense in basketball can be extremely tiring at points, especially at the end of a game. However, this is when preventing defensive breakdowns matters the most. One mental lapse or mistake can cost the team the game. This is why it is so important to practice defense with high intensity and not only work on the physical movements of playing defense the correct way but also being able to think and communicate while doing so.

PrevPreviousWhat Does Your Record Reflect?
Next10 Characteristics of a High Character Basketball PlayersNext
On Key