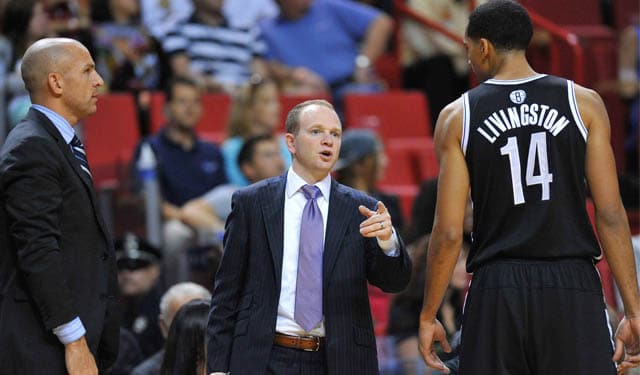 Lawrence Frank is part of the Brooklyn Nets coaching staff currently; However, he has held multiple coaching positions in the NBA throughout his career, including multiple head coaching stints (New Jersey Nets and Detroit Pistons). Coach Frank is considered a great basketball mind in today’s game. These basketball coaching clinic notes are from when he spoke at the 2014 Coaching U Clinic. Notes were taken by Jacob Collins.

Breakdown Offenses – The Play After the Play

“Under pressure, you don’t rise to the occasion; you sink to the level of your training. That’s why we train so hard.”—Navy Seals

-Principles and concepts of playing.

-Do your players know your Offensive and Defensive Musts?

-What do you stand for?

-Write your basketball coaching philosophy down.

-Specific sets—primary scorers to get shots in their spots.

Big catches above FT line is called “Big Above.”

9 things the “Big Above” can do

-Strong= Strongside triangle w/opposite post at the top of the key and opposite wing in the corner.

– Duck in move—lock the back foot.

– Study the nuances of the great player.

The goal of PnR defense

-Neither the ball handler nor the 1st pass gets a shot.

-Anytime slot to corner = slot cut (shoot or pass quickly and cut through to weak side).

– If teams down a ball screen, make the PnR higher and wider.