Scoring Out of the Triple Threat in Basketball 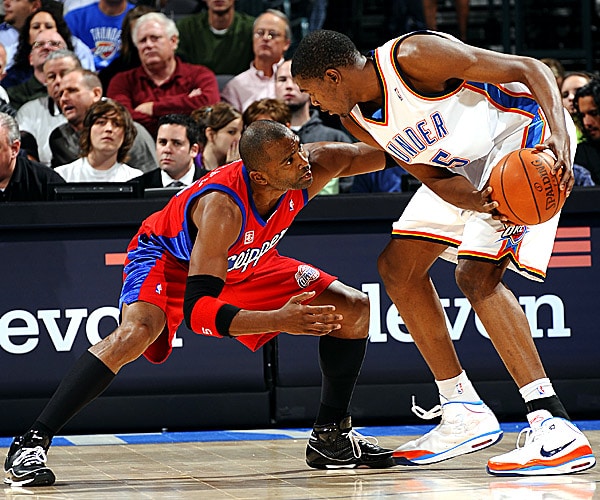 Too many times, players catch the ball standing straight up and down. If you are playing against a bad defensive team or are simply better than the person guarding you, this might not be a big deal. However, if someone is pressuring you, it can be the difference between a turnover and running your offense. You can create space between you in your defender by ripping the ball through or jabbing at your defender.

When you rip the ball through, make sure that you go hip to hip and keep a strong grip on the ball. If you rip the ball through and drive past your defender a couple of times and make a good play for yourself or a teammate, the defender will give you space for the rest of the game because he doesn’t want to get beat again. Use the defender’s pressure against him and exploit him. The best way to do this is with jab steps, rip throughs, shot fakes, etc. Don’t let the defender dictate how he is going to guard you.

Whether you are going to shoot, jab step shot, jab & go, shot fake & go, step across & go, etc., you need to learn all of the different moves. It will take time to learn the footwork, but using basketball drills like these to master the different moves will make you a more fluid scorer and keep the defender at your mercy.

After you have learned the footwork for the different moves and can execute the moves the right way, you need to practice against a live defender. Being able to read the defense is key when trying to score out of the triple threat. You must sell your move and then counter what the defense does in a small window of time.

If you shot fake and the defender bites, you don’t have time to reset; you need to be driving the ball past him while he is in the air. Don’t hesitate with your moves and be efficient with your dribbles. Put the ball down with purpose and go somewhere with every dribble. 1 on 1, 3 Chairs basketball drill is a great competition basketball drill for practicing your triple threat moves and learning how to read the defender.

Scoring Out of the Triple Threat in Basketball Conclusion

Watch Kobe Bryant’s moves and some of the other great players who can score out of the triple threat, and you will see just how valuable it can be. Put the time into learning the moves and selling your shot fake and jab step, and you will be tough to guard one on one.