Tips for Beating a Zone Defense in Basketball 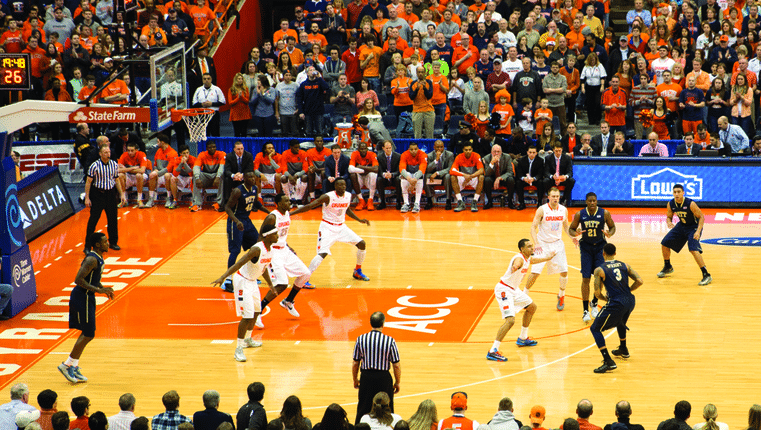 Most zone defenses in basketball aim to keep the ball moving aimlessly around the perimeter before a low percentage shot is eventually put up. Even knowing this, there are still a lot of offenses that still fall into this trap. Offenses will hit a few 3 pointers at the start but will fall in love with low percentage shots, and by the end of the game, they have fallen right into the zone defense’s trap.

Zone defenses can be exploited, and there are high percentage shots to be had if your offense is set up with the right situations. Hopefully, this offensive basketball coaching article will provide you with a few tips for beating a zone defense in basketball.

Don’t Stand, Move With a Purpose Against the Zone

As basketball coaches, we have all at one point or another yelled, “don’t stand, move!” Unfortunately, most of the time, our players (for lack of a better term) start running around like chickens with their heads cut off. They cut and move with no timing, and nothing comes of it. When it comes to beating a zone defense in basketball, players must understand when and where they should be moving.

If you have a more experienced team, you can talk about timing and some of the purposes of cutting, and this usually is enough because they have a higher basketball IQ. However, if you have a less experienced basketball team, a great option is putting in a zone motion offense with specific rules for when and where a player should cut, fill, space, screen, etc. This will allow your players not to get bogged down with overthinking and will help simplify their responsibilities.

In a zone motion offense, players still need to understand what is going on, but with the different rules, it helps to alleviate a lot of the pressure of knowing what to do off the basketball.

Shift the Zone Defense by Moving the Ball

Equally as important (or even more) as player movement is ball movement. A zone defense in basketball is designed to load up on the side of the ball so that there are no angles to penetrate or make entry passes. So if you can get the ball moving side to side and even better yet, inside out, you have a great chance of making the defense shift, which creates potential defensive breakdowns.

The key is not allowing any of your players to be ball stoppers. There will be players on your team that feel the need to catch and dribble every time they receive the ball. If you allow this to happen, your zone offense will not work. Catching and holding the ball or catching and dribbling the ball without purpose allows the defense to recover and reset. Keep the ball moving.

Before a player catches the ball, they should already know what they will do with it. The three main options are; catch and shoot (if open and a good shooter), drive the ball (either to score or to kick), or pass (which is usually the most common option). The longer a player holds the ball, the more time the defense has to recover. So the ball must be moving from player to player with purpose.

Hard Cuts Through the Zone

We have already touched on player movement, but specifically talking about cutting, players must be cutting hard and with purpose, even if they aren’t getting the ball. If a player can execute a hard cut to the basket, it is going to force the defense to respect them, and that means that either they are going to get a scoring opportunity, or it is going to open up a scoring opportunity for someone else. However, if the player doesn’t cut hard, the defense doesn’t respect the cut, and there is no shifting or over helping.

Hard cuts are extremely important in beating a zone defense in basketball. You must force the defense to respect and guard every player that cuts through the zone. This will force the defense to move and communicate, which will lead to (you guessed it) more potential defensive breakdowns.

Play Inside Out Against the Zone

If the goal of a zone defense in basketball is to keep the ball outside on the perimeter, it makes sense that the offense should want to get the ball inside the zone. Playing inside out can be accomplished in several different ways. It can be created with hard cuts/player movement like we just talked about, it can be achieved by dribble penetration and attacking gaps in a zone, and it can be done by feeding the low or high post and playing out of it.

If you can get the ball inside through one of these means, you force the defense to have to suck in to help; this opens up kick-outs for open HIGH PERCENTAGE shots. There is a huge difference between inside out 3’s and 3’s from a lack of ball movement. Playing inside out forces the defense to have to move, shift, and recover, and any time you get a defense doing this, it opens up scoring possibilities.

Against a zone defense, you aren’t really going to be able to run a set basketball play every time down. Still, during a game, if you execute correctly and run your set basketball plays at advantageous times, you can usually get 8-10 points from them, which could easily be the difference between a win and a loss.

Great basketball coaches can put their best players in positions where they can succeed. So if you have a player that is a knockdown shooter, run some different zone 3 point basketball plays throughout the game that will get them a wide-open shot. If you have a freak athlete run a misdirection zone lob basketball play for them, or if you have a post player that can’t be stopped in the post, run some different actions to allow your post player to get the ball around the basket.

Depending on your basketball team and strengths, you are going to have different set plays. So find the zone basketball plays that work best for your team and take advantage of them periodically throughout the course of a game.

Use Screens Against the Zone

Even though defenders aren’t specifically assigned to guard one player in a zone, it is still beneficial to the offense to set screens. The two primary screens that work the best to score against a zone defense in basketball are seal-in screens and ball screens. If used correctly, both can put the zone defense in a difficult situation that forces them to rotate, shift, and communicate. This means that there is potential for defensive breakdowns and opportunities for the offense to get a great look.

Ball screens against the top defenders of the zone are also great because they create angles for penetration and overload situations. If the top defender chooses to fight over the ball screen, there will be an angle for the ball handler to attack. If the defender decides to bump off the ball handler to the next defender in line, it will create an overload situation if you place a couple of good shooters on the perimeter and quickly swing the ball.

Seal in screens are great to use for shooters on a quick ball reversal or a skip pass. If you can get the defense rotating one way and then seal them in on the backside for a quick reversal or skip pass, you can end up with some good action. If the wing defender leaves too early, the screener will be open for a shot or a finish at the basket.

Tips for Beating a Zone Defense in Basketball Conclusion

As it goes with pretty much anything, it is easier said than done. So while all of these keys provide the information for beating a zone defense in basketball, it also takes a commitment to working on these keys with your team. It is essential that as a coach, you are consistently going over the keys of good zone offense with your basketball team. Whether you are facing teams that primarily run zone or face teams that use it sparingly, you must be able to take advantage of it whenever you come across it.