How to Score Against a 2-3 Zone in Basketball 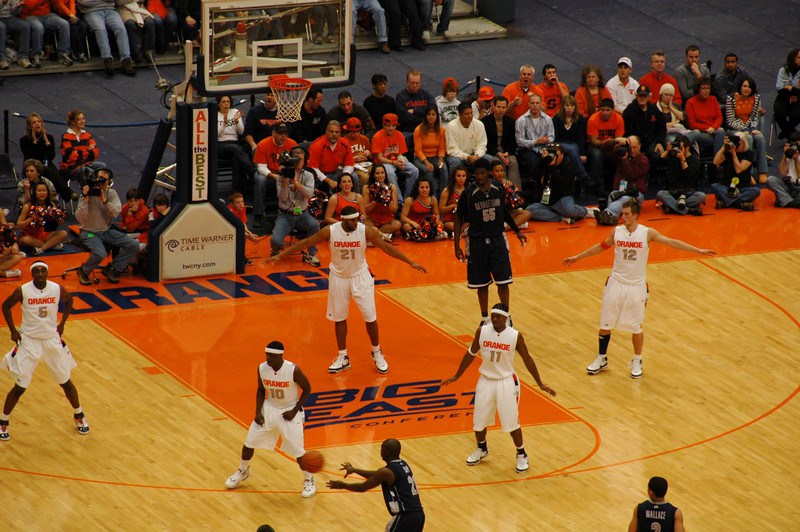 A basketball team will run a 2-3 zone defense for several different reasons. It could be because they don’t think that your team shoots well, they might be undersized, it also could be what they do well, or maybe it could be to take you out of your normal man-to-man basketball plays. Whatever the reason is, it is your job as the coach to have your team prepared to score against a 2-3 in basketball.

Before discussing how to beat the zone, it is important to recognize what the defense is trying to get you to do by playing your team in a zone defense. The goal of a 2-3 defense is to keep everything outside, make the offense stagnant, and force contested 3 pointers. As a basketball coach, it is important to make sure that your team does not fall into these traps. Don’t let the defense dictate what you are going to do with your zone offense.

Ball Movement to Shift the Zone

The best way to score against a 2-3 zone in basketball is with ball movement and player movement through the zone. If your team is standing around the perimeter, passing the ball back and forth, it is easy for the defense to guard. The ball needs to be moving around the zone, and players need to be flashing into the zone for passes. If you can get the ball in the high post, the defense has to suck in, opening up teammates.

It is the same if you can get a catch on the low block. The biggest thing when playing against a zone is don’t let your players be ball stoppers. A ball stopper catches and holds the ball every time they touch it; this will kill your zone offense. Keep the ball and your players moving.

In a zone defense, every player is designed a specific area to guard, and anyone that comes into that area is their responsibility. A great way to score against a 2-3 zone in basketball is to overload a specific side or spot on the floor. This causes the defensive players to have to decide who they are going to guard and how they will guard them.

Using the Dribble to Attack the Zone

Along with passing the ball around and through the zone, you can beat a zone with dribbling. I hesitate to say this because players will think that they can break down a zone by going one on one with the dribble; this is not the case. The only time you should be dribbling; is off of a ball screen, driving a gap, or improving a passing angle.  Many basketball coaches don’t really use ball-screen plays against the zone, and it wasn’t until I played professionally in Spain that I really realized how good they actually work.

If you can get one of the top two defenders to make a mistake on the ball screen, this opens up a great scoring opportunity for the rest of the team. I mentioned earlier the term “driving the gap,” this means that when you catch the ball in between two zone defenders on the perimeter, there is a gap between those two players.

If you drive that gap, both defenders will suck in towards you, which means that there are now two defenders on you. When you pass the ball out the double, your team will have the advantage because they are now 4 on 3. This can lead to a good shot or another gap drive. By this time, the defense is all out of sorts and scrabbling, which should lead to an open look.

It is important to have set plays and motion plays against a zone. Motion plays are continual movement until someone shoots the ball or breaks the play off. Set plays are when you run the play, and you are looking for a specific shot for a specific player. Your playbook should have 2-3 zone motion basketball offenses and 4-5 set plays, minimum.

The set plays can be for 3’s, lobs, high post, low post, ball screen, etc. Your team’s motion offense should include a ball screen motion, cutting motion, and some kind of high low motion. Your set zone basketball plays should get you 6-10 points, and they should be plays that your team can execute very well.

How to Score Against a 2-3 Zone in Basketball Conclusion

A couple of other notes about playing against a 2-3 zone in basketball; don’t shoot early 3 pointers and crash hard on the offensive boards. A lot of players don’t realize that if a long 3 is open at the beginning of the play, it will be there 20 seconds later after you have already run some offense. Unless you have a knock-down basketball shooter that is just feeling it, encourage your players to run the offense.

If nothing is there, shoot the 3, or even better than that, try to shoot a 3 out of the offense. If the ball goes inside out to a good shooter, they need to shoot it every time, unless running a specific set play. It is tough to defensive rebound out of a zone because it is so hard to get matched up for a box out on the shot. Make sure that your offensive players are taking advantage of this. Remind them to go hard to the glass and get second-chance points for your team.

Scoring against a 2-3 zone in basketball is all about not falling into the traps and running your offense the right way. You don’t have to shoot great to beat a zone, just be aggressive, and attack the zone. Prepare your team in advance and explain to them why you shouldn’t shoot quick 3’s and how it is important to keep the ball moving. The more your basketball players understand what they are supposed to do, the better they will do it.