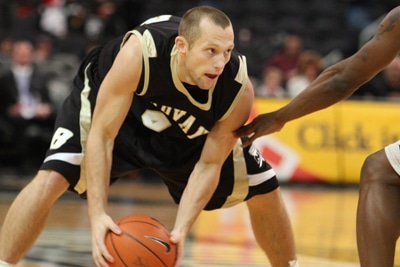 Quad threat is a basketball technique we stress quite frequently at Thomas University. Also known as “triple threat,” this technique is the cornerstone skill of our player-development program. Quad threat is a simple basketball function that has stimulated our growth of players and helped minimize turnovers in live-action. Shoot, pass, dribble, and pivot are the four basketball skills that every team at any level uses every day in practice, individual workouts, and games.

Quad threat, or “triple threat” to most, is a learned behavior and a skill that needs to be emphasized more at all levels. We will take a look at each component of quad threat in basketball and discuss the movements and actions out of quad threat that can be accomplished.

Everybody loves to hear the old cliché, “you can’t score if you don’t shoot.” There is actually some truth to that statement; however, that phrase focuses on the result, not the process. First and foremost, a basketball player cannot do anything on the court without being in an athletic position: knees bent, feet just outside of shoulder-width apart, on balance, chest facing the action, mind alert, back straight, and hands ready to catch.

The closest athletic stance in another sport we like to emphasize is like a short stop in baseball, a linebacker in football, and a tennis or a volleyball player about to receive a serve. Those are all similar athletic positions in their respective sport in which basketball players can relate to. In this athletic stance, quad threat can be accomplished, and a player can jump, step, jab, and move forward, backward, sideways, sprint, jog, run, and dive.

There are a million different specific techniques used to shoot a basketball. Every player has his or her own way of being comfortable when shooting a basketball. Now, there is an occasional post player or guard who has never been taught, and who we may start from the beginning with the basketball camp terminologies of “90 degrees,” “shot pocket,” and my personal favorite, “reach in the cookie jar.” Balance is arguably one of the most important aspects of shooting the basketball.

For example, getting the basketball player’s feet aligned to an athletic stance, so they have the momentum to not fade or lean different directions for a properly balanced release, and follow-through is an essential aspect. We teach three different kinds of footwork to have when catching the basketball to shoot:

The beauty of this game is that no shot, play, or instance in a game is exactly the same every time. Coaches need to teach players multiple ways to shoot the basketball from all different areas on the floor. For example, the Mikan Drill should not only be used for post players but guards as well.

To guards, coaches sometimes say “get to the basket” or “finish strong.” We all need to do a better job of teaching them what exactly that means. For instance, shooting off of one foot or using both feet is a completely different shot. Roy Williams, the head men’s basketball coach at UNC, said at a basketball coaching clinic: “Getting movement of players and the basketball from place to place on the court is coaching. Once the basketball is shot, that’s recruiting.”

A post entry pass against pressure is a lost art in our game. I have seen too many times where a guard just flings the basketball into the post, my players included, and it gets tipped or is a bad pass where the post player can’t make a move and has to adjust because the pass was so bad.

As offered, quad threat focuses on the process of teaching players to become more skilled in their efforts to make a simple catchable pass into the post or just simply passing it to a wide-open shooter. A pass is a team effort. On a pass, the basketball has to be thrown at a speed against pressure where the defender guarding the ball doesn’t touch it and creates a turnover.

Additionally, the catcher must be available to create a sort of separation from his defender so he can catch the basketball without fumbling it. If the passer starts the process of passing in quad threat and the catcher ends the process in quad threat, I would most certainly like the chances of that pass being completed. As a basketball coach, have you ever told a player, “bad job!” for getting into quad threat?

Quad threat in basketball teaches a player how to begin the process of dribbling. As is known, the whole purpose of dribbling the basketball is to get to different places on the court to get a shot attempt. Sean Miller, the head coach of the men’s basketball program at Arizona, has a great basketball drill on YouTube that teaches point guards to create a space between the ball handler and the player guarding the basketball against unbelievable pressure.

This space allows the ball handler a second or two to gather himself and make a play. He calls this space “the gap.” An offensive player handling the basketball wants space from the defender to gain momentum to get from spot to spot on the court. Once that guard has created “the gap” between himself and the defender, it is a pressure release to get into an offense.

On the catch, quad threat begins the process that allows that offensive player to get to different places on the court in an athletic stance against an unwavering defender.

At the college basketball level, and perhaps all levels, good point guards are determined by their get-by ability, which is an offensive player getting by their defender in the full or half-court. Some players that are fast or quick can get-by players, but also, some players that are strong and powerful get-by players. Quad threat begins the process of getting by, and dribbling ends the ability to move past a defender to put himself in a position to make a play.

Pivoting with the Basketball

Pivoting is the most under-coached and under-valued skill in basketball. It is a skill that is not taught enough, and the good players always exhibit the best and the timeliest of pivots. Accomplishing such skill starts out of quad threat. Forward and reverse pivoting are equally important.

For example, a basketball player may pivot forward into pressure to make the defender back up to create space to shoot, pass or dribble. Or, a player may reverse pivot away from the defender to take the space available with the dribble. Jab stepping is a form of pivoting, and it complicates a defender on where a player may be going.

A great basketball drill we use is called “Georgetown.” John Thompson originated this drill, and it is great for all levels to improve skill.

Shoot, pass, dribble, and pivot are the four cornerstones of the most embraced basketball skill by coaches: Quad Threat. This is a skill that needs to be utilized more at all levels to improve player development. It can be deemed as “boring” and not flamboyant, but it is our jobs as basketball coaches to improve our players’ skill level and to make it fun and useful in our respective programs.

PrevPreviousBreaking Down the Back Cut in Basketball
NextDeveloping Coach to Player Relationships in Basketball: “The One Per Day Rule”Next
On Key