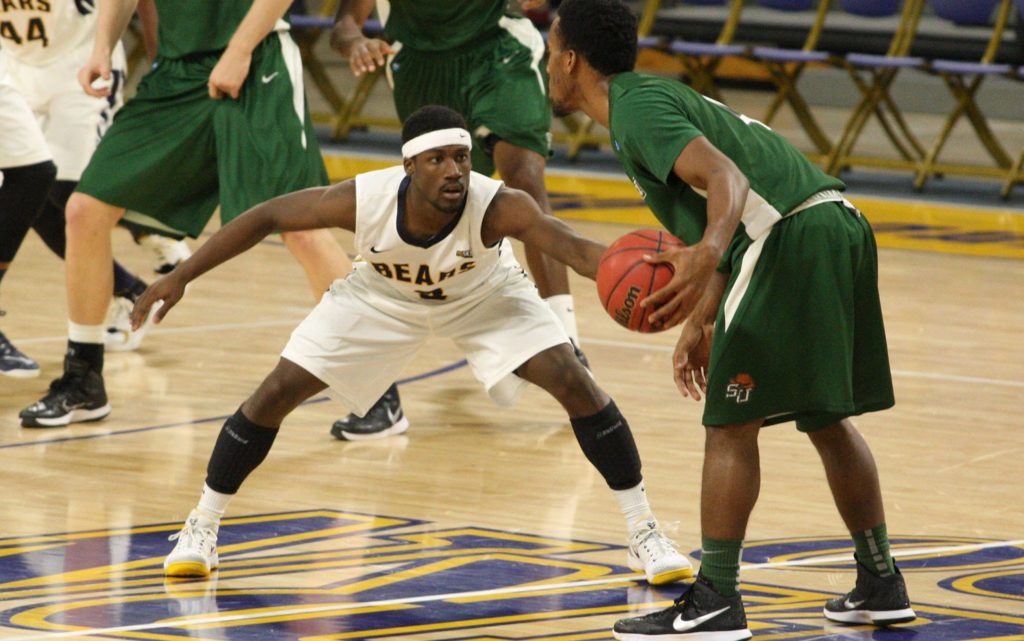 I am really excited to talk a little bit about our defensive philosophy and system here at the University of Northern Colorado. This basketball coaching article will break down our sets of “5” on defense that we focus on as a basketball program.

Our staff (led by Head Coach Jeff Linder) just completed our first season at UNC, and during our first year and as we move forward, we know that a big determining factor of our success each year will be determined by how well we defend as a team and rebound.

We spend a lot of time daily in practice to build the habits that will translate to a successful defensive team. We also spend a lot of time in the film room with our players on an individual basis (our three assistants each have five players that we are responsible for cutting film for during practices and games), and we chart and rate multiple categories in both practice and games (more on this later).

Scouting of upcoming opponents is also of utmost importance in our program. We subscribe to Billy Donovan’s ratio of 80:20: 80% of what we do in each game defensively is built upon our system and philosophy, whereas 20% of what we do is built on scouting and attempting to take away our opponent’s strengths.

I think that is an excellent ratio for basketball coaches at any level. As a coach, you never want to be so stubborn in your system that you do not make adjustments for each opponent, but (in my opinion) you also do not want to be a coach that has no core to your defense and tries to adjust and game-plan differently for each opponent.

There must be a core to what your basketball team does on the defensive end.

I heard recently on a podcast with Jeff Bzdelik that in the past 10 NBA Finals, 17 of those 20 teams that made the finals were Top 10 in the NBA on both the offensive AND defensive end of the floor. Success is hard to come by if your basketball team is not committed to getting stops.

During our first season last year, we jumped up to #218, a leap of 130 spots from the previous year’s, finished #2 in the Big Sky, finished #32 in the nation in Opponent Offensive Rebound %, and had a freshman that was named Defensive Player of the Year.

As our team gets older, more mature physically and mentally, and we get more size and length on the floor, our goal is to make another big leap in the coming year(s).

Rule #1 is as simple as it gets. To be a great defense in basketball, players must be willing to make multiple efforts. It is not enough to closeout and contest a shot and then forget to turn and sprint two steps to get the rebound. We must constantly make multiple efforts if our defense is going to be elite.

We rate the opposing team’s perimeter players in 1 of 3 categories (Sniper, Player, Driver). For any “Sniper,” our goal is to allow no 3pt attempts. If we’re guarding a great shooter that is 44% from 3 and attempts 8 of those 3’s per game, if we can limit that shooter to 2 attempts, we are in business!

A lot of basketball teams make a rule of no paint touches, which is a good idea. We have adjusted our thinking to condense that area into what we call “The House.” The House is basically a foot outside of each FT lane line and 1 foot above the 1st hash.

We’ll tape down a blue box for our house in each practice. Many of our team basketball drills are built to keep the ball from getting into The House. Our reasoning is that we absolutely cannot give up layups, as layups are one of the highest % shots in basketball (along with open 3’s and Free Throws).

We believe that every shot must be contested, whether it is a 3, pull-up, lay-up, hook shot from the post, etc. Our basic rule is that we leave the floor to contest when the opposing offensive player leaves the floor for the shot, NEVER before. We work on closeouts every day and attempt to build the habits in our players to only leave the floor after the shooter is in the air.

This goes to our Defensive Rebound Coverage, and we spend more time working on rebounding the basketball than probably any other area of the game. It does us no good to guard for 28 seconds for a tough, contested 2 (the shot we want our opponent to take) and then give up an offensive rebound. O-Boards are one of the most demoralizing pieces of the game, so we drill, and drill, and drill our players to become a great defensive rebounding team.

5 Things We Work on Everyday

We will add many other components to our defensive package during each practice, but these are the five areas we work on every day.

The 5 Keys to Each of the Above

(1) Understand your role on every shot → Are you a “Crash” or “Get-Back” guy? (2) Everybody = 3 sprint steps (on the release for our Get-Back guys, on the Defensive rebound for our Crash guys), turn and find the ball. (3) Talk and Point (4) Top guard must declare the ball; other players must build walls in the gaps. (5) No 3’s (they almost always happen within the first two passes of transition).

(1) Understand your opponent and the distance of your closeout (Are you guarding a Sniper, Player, or Driver? This determines the distance of the closeout). (2) Closeout with the proper angle → Our team defense is built to not get beat to the outside (to the baseline). (3) Have a “Stick-Hand” on the closeout → One hand extended above the ball. (4) Be ready to take the jab (release and a small step back on any attacking move). (5) On any shot, we leave the floor after the opposing player leaves the floor for his shot, but not sooner. We land and then take two hard steps towards the basket for the defensive rebound.

(1) Always have a Stick-Hand to discourage the raise-up 3. (2) Do not get beat to the outside (baseline). (3) Hands off, do not foul! (4) Do not let the ball in The House. (5) The first dribble is the most important; we cannot get beat on the first dribble.

(email me for in-depth descriptions stevesmiley0522@yahoo.com)

This is a high-speed, high-intensity basketball drill. Players have to talk the entire time, closeout to proper areas, closeout to their player with the Stick-Hand, etc., or the whistle immediately blows the play dead, and that team is off. One point is awarded for a defensive stop.

Stay on defense if you get a stop, and continue. If a team gets 3 stops in a row, we call that a KILL, and we award 5 bonus points. Play for a set amount of time, and losers run.

Based on how we are going to guard the other team, we chart every scout mistake. This year, we averaged 8.2 Scout mistakes per game and gave up 13.2 points per game on those mistakes.

Each player is expected to grade out on rebounding effort at a minimum of 80% in each game and practice. We chart every player on every rebound for both offense and defense. For the sake of this being a defensive basketball article, the player gets a “Yes” if he checks his opponent on each shot, and then if that opponent crashes, he confronts the opponent and pursues the rebound.

If our player just turns and goes to the rim on the shot, without checking, he gets a “No.” This is a bit of a simplified explanation, but the point is that we check every rebound for our players and then show the film to them. Our players have to average 80% or more (do the right thing at least 4 out of every 5 rebound attempts).

This is an Advanced Stat that we took a lot of pride in this year. Opposing Team’s Offensive Rebounding % against us was 25.4%, so our Defensive Rebound % is basically 74.6%, which was good for #32 in the nation. It’s a great measurable for us based on how much we emphasize rebounding in practice.

Offensive Rating For Each Individual (From KenPom)

This is a stat I look at a lot when preparing scouting reports. I use this a lot more than the basics of PPG, etc. For instance, if an opponent is scoring a lot, but their O-rating is 85.6 (which is bad), we know that we just need to force that player into the shots we want him to take, and he will probably take them, which will help us out.

Conversely, if an opponent only averages 9 PPG but has an extremely high rating of 115.2, we have to be on high alert when he is in the game. Maybe he only averages 9 because his minutes are sporadic, but he is a highly efficient offensive player, so we have to know where he is when in the game and plan our scout accordingly.

You can hold your defense accountable in many different ways, but we believe that we have found a good system here at the University of Northern Colorado. Our goal is to continually improve our defense through accountability, hard work, and the tracking of stats. Hopefully, you can find some great ways to help your team defense to improve from this article.

Steve Smiley joined the University of Northern Colorado coaching staff in 2016. Before joining the Bears, he was a part of the Weber State program, and before that, he was the head coach at Sheridan College for 6 years.