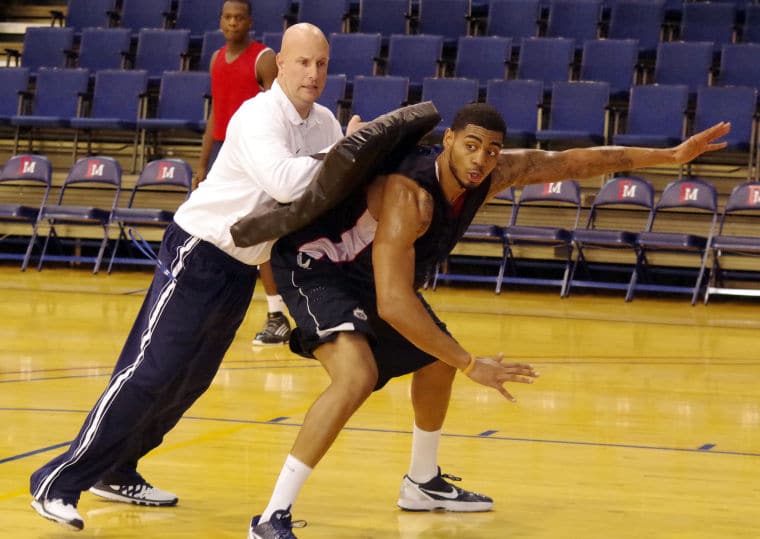 While the game of basketball has changed and evolved over the years to become more spread out offensively, I am a firm believer in having a strong inside presence that can take the pressure off outside shooters. Having a low post scoring threat is key to a balanced offensive attack in basketball. Here are some key concepts that I think are paramount in basketball post player development.

More and more basketball teams want to play an up-tempo style, so it is essential to be in great shape and be a good runner. Whether you are a longer 6’8” and 215 pounds or a bulkier 6’5” and 240 pounds, you need to be able to run the floor. You will be a rim runner most of the time, but sometimes you could be filling a lane or running to the trail spot.

Especially on a missed shot, your guards are going to want to push the basketball in transition, so you need to be able to keep pace. Being a great runner should be able to get you anywhere from three to four baskets per game. Think about that for a second. That is anywhere from six to eight points or more just by running hard. That can go a long way in close games.

It would be nice to have a Kevin Garnett or Hakeem Olajuwon where you are blessed with a variety of low post moves. It takes those guys hours and hours of gym time to do that. For our basketball post players, I like to keep it relatively simple, at least initially. I want them to master two or three post moves and become nearly unguardable while using those moves.

Every day during our individual basketball workouts and breakdown segments during practice, we focus on three basketball post moves. We work on these from both sides of the floor, so we cannot be scouted easily.

Middle Jump Hook: We work on this with and without a dribble.

Counter Post Move: I don’t specify what their counter can be. It might be a drop step post-move or it might be an up-and-under post-move. Once we start our workouts, we will try a couple of them out and let the post player decide what he is most comfortable doing. Once he figures that out, we stick with that counter and work to master it.

In today’s game, it is crucial that forwards are more than just a low block scorer. While having an efficient low post scorer is always a significant part of your offense, if you can make perimeter shots and become more versatile, now you have something very potent.

With that said, I do not mean that they must shoot 40% from the 3-point line. We work every day with our forwards on 15-18 foot jumpers. Primarily, we work from the short corners and the elbows.

Those are the areas from which we feel our forwards get a lot of touches and have opportunities to shoot the basketball. We will also work with our forwards on the trail 3-pointer. Again, it is not a shot that we expect them to make at a high clip, but we want them to have it in their game when the opportunity presents itself.

This one skill will translate no matter what level you play basketball at. Some of the best rebounders in the NBA are not great scorers, but they carve out terrific careers because they are relentless on the glass. One of Pensacola’s own, Reggie Evans, played 13 years in the league and never averaged more than 5.9 points per game. However, he made a long basketball playing career out of being a great rebounder.

Rebounding comes down to positioning and, most importantly, your heart and effort. One of my favorite basketball rebounding drills that we do with our forwards is the “2nd Effort Drill.” This is for offensive rebounding, which again can steal you two to four baskets per game.

I always seem to catch our players scoring a bucket or two per basketball game where they have gotten an offensive rebound and used one of the “2nd Effort Drill” finishes.

Here are a few more basketball rebounding drills that you can use with your players:

Having great footwork can really impact your positioning and how your score around the basket in basketball. Again, we start slow with our footwork basketball drills and keep them simple. We do a lot of jumping rope and ladder drills throughout our pre-season workouts and during our practices.

One of the best centers in NBA history, Hakeem Olajuwon, had arguably the best footwork in basketball. There is a terrific video that we show our forwards during the spring and summer months that shows several drills that can help your footwork in the low post. Here is the link to the video – Attention to Detail: Hakeem Olajuwon

I would rather work on a few basketball drills and concepts repeatedly than teach many different moves a few times here and a few times there. We work on the same low-post moves and perimeter basketball shooting drills EVERY DAY.

Yes, sometimes a player may get a little discouraged or bored with doing the same things, but that is what makes great basketball players great. They master their craft to the point where it becomes unguardable. That’s what we strive for with our forwards.

It is important to not forget about the basketball fundamentals that all players need to have. For example, you can have a deep post seal and have a great position to score the ball, but if you can’t catch it, then you lose that opportunity.

You may have snatched a tough rebound and are looking to start your fast break, but if you cannot pass or dribble, you might lose that opportunity. We work on dribbling, passing, and catching the basketball every day with our forwards.

It is so important to be able to have those basic basketball fundamentals. No matter what position you play, you must be able to dribble, pass, and catch.

Playing off ball screens is all the rage in today’s game. If you watch the NBA and college basketball, so many teams are using ball screens. We work on playing out of ball screens every day. Along with the rest of the things we teach, we keep it relatively simple.

We use a lot of sprint screens in our offense, so anytime we do ball screen work in our breakdown drills, we use a sprint screen. We work mainly on four moves out of the pick and roll.

Like our low-post basketball moves, we work on these from both sides of the floor.

I hope you could pick something up from this skill development basketball coaching article that will help you as a coach and help your team. Our basketball practices and workouts are always open, so we would love to have you stop by if you are in the area. My contact info is bbenator@uwf.edu, so please feel free to reach out.

Brian Benator has been a part of the University of West Florida basketball program as an assistant coach since 2015. Coach Benator has also spent time at Young Harris, Fishburne Military School, UT Chattanooga, North Georgia College, and State University.