So you Think you are a Basketball Gym Rat? 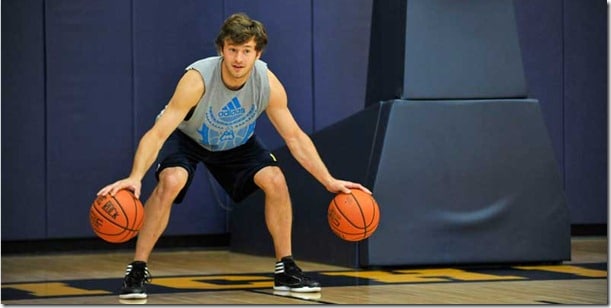 This article was written by Trevor Quinn, who is an assistant men’s basketball coach at Jacksonville University.

This term gym rat is circulating as descriptive verbiage for every young basketball player being recruited today. It may be a corny or ‘old school’ expression recently replaced by “grinding,” but at one time, it was the ultimate compliment. As college coaches, we recruit basketball players with basketball talent.

A player has to have talent first, but a basketball player separates himself from the talent like he doesn’t have it at all. If we call a High School coach, AAU coach, local workout guy, or parent, more times than not, a potential recruit is referred to as a “gym rat.” It is an easy thing to say, and of course, the person has a vested interest in his/her pupil – but is the player really a gym rat?

To put it simply: the lights come on, and there’s the rat…Lights go off, and there’s the rat. It is looking for whatever it can to eat or survive. The gym rat is hungry, and no one is feeding it — more often than not, it is trying to be exterminated. In the case of a gym rat, it is attempting to find any little piece of basketball knowledge or competitive advantage that can increase their survival rate.

These little guys are starving, and they don’t need someone to set out some food for them. For instance, they don’t need a coach to get them a gym (Go find a game?), give them some basketball drills (Figure it out?), or get the perfect equipment (just go hoop!). That’s what the best players do! They understand that action takes precedence over plan…While you’re waiting for the perfect setting to work on your game, they are already out there doing what you’re planning to do!

Extermination of the Gym Rat in Basketball

The gym rat species is on the brink of extermination these days, no matter what reports we get to the contrary. A recruit may have all the necessary responsibilities such as school, church, homework, the SAT, anything, even chores, but guess what? Every 1st team all-NBA player probably encountered these same obligations while they were trying to make it. They most likely attacked them with the notion that these would be the building blocks to their future success.

These are not excuses; they are necessities. Then there are the biggest hindrances to living your life as a gym rat.  These are the unnecessary evils attempting to exterminate the population. A gym rat can encounter people setting traps or constantly trying to feed them poison. Traps decimating the gym rat population can be anything from girls to Twitter; they will keep you from where you need to be…IN THE GYM!!! It’s up to you if that’s what you want to be. My guess is if you respect the local basketball community, I bet you all that stuff will come along with it.

Poison can be anything that alters the mindset. It could be a simple as a peer telling you, “you’re not any good; you should quit.” That is poison to a budding gym rat, but you don’t have to be duped into swallowing that. There’s a lot of other crap that can derail any athlete from striving for greatness. You can find stories for days about college/pro athletes who get caught up by the police doing something, but I’ve never heard of any of them getting caught while in a gym.

In my basketball coaching career, I feel like I have been around just two guys who, without a doubt, during our time together, could be considered gym rats. One was Al Thornton, who at Florida State went from unheralded recruit (Ranked #217) to NBA lottery pick. This was my interaction with Al Thornton. I knew he was working out every day at 10:00 AM, but then some days, Coach Hamilton may ask me to go find Al? He was typically at one of 3 places in Tallahassee and sometimes all three in a day.

After he worked out, he would either go from playing pick up at FAMU to playing pick up at TCC or just going straight back to our basketball training center. This was a typical day for Al. He would be in the gym for 8 hours a day, trying to see what he could add/try to do in a game that day. He didn’t know anything else!!! All I know is that was normal for him, and that is what helped him go from redshirt freshmen to 1st team All-ACC and a Lottery pick (Just look at the improvement of his season stats over 4 years).

The other was Ben Smith, a four-year starting Point Guard at Jacksonville University. Ben Was 5’10” – if that – and only had one Division I offer coming out of high school. He became a 1st team All-Atlantic Sun player for three straight seasons, won two conference titles, and his name is all over the school record book.

Every night usually around 10:00 PM, he got shots up. After lifting weights, class, individuals, pick up, and study hall, he got shots up. I’m not talking about a shoot, then talk for 20 seconds…I’m saying this man GOT SHOTS UP! He shot 28% from the three-point line his freshmen year. In his mind, he wouldn’t ever let that happen again, so for the next 3 years, he shot over 35%. One league opponent would make it easily apparent that their belief was he couldn’t go left.

So the following off-season, his sole purpose in life was to become equally adept with both hands. He would go into the gym a lot of days and refuse to use his right hand (HE HAD PURPOSE). Ben just came back from averaging more than 25 ppg overseas. Because of his dedication to his craft, his name is mentioned next to Artis Gilmore, Dee Brown, Rex Morgan, and Otis Smith as one of the best players to play at Jacksonville University.

These gym rats are a rare and dying breed. The term is thrown around so loosely that it is losing its grit. If I call a player and he picks up on the first ring or tweets every hour on the hour, he probably isn’t going to be in the gym the number of hours necessary to make it to the next level (Varsity, college, Pro). If enrolled in a weight training class…LIFT THE WEIGHT more times than you look in the mirror.

If you’re going to the gym, then go with a purpose (To make _______ # of shots or work on ______). You know you may encounter a gym rat when your phone rings at 10:00 PM, and a recruit says… “Coach, sorry I missed your call. I went and lifted after school, then our high school team had workouts, and then we had AAU practice. I just finished my homework and went for a jog. I wanted to call you back before I ate dinner.”

If you’re returning a call at 10:00 PM because this is your first free moment, then maybe a college coach, who really knows what it means, will be proud to justify anointing you as a Gym rat.