Timeouts and Bench Procedure in Basketball 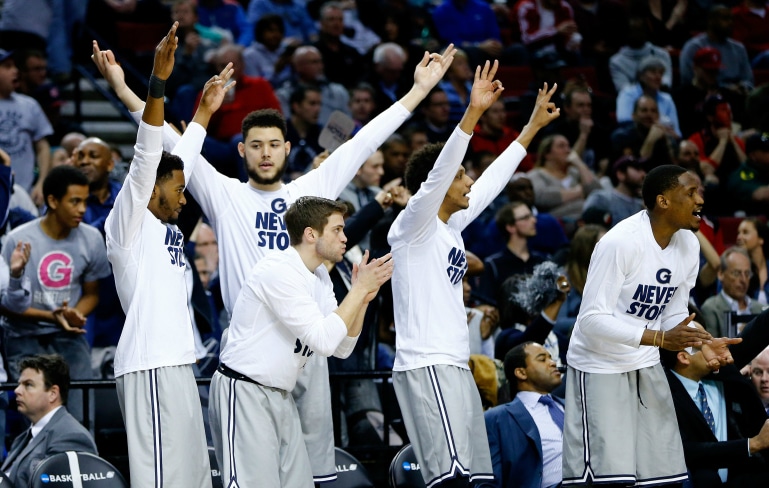 The bench must be totally engaged and into the game (mentally and physically). Lack of engagement is a clear indicator to the coach that the player is more concerned with themselves than the team. Being engaged sends a message to the coaches and the rest of the team that a player is ready to play and is invested in the game.

The bench must cheer for their teammates and not sit as spectators. The cheering must be positive and empowering. It must be the type of cheering you would want to hear when you are on the floor.

The players on the bench should stand and extend their hand to the teammate that is coming out of the game. This is a form of solidarity and a demonstration of TEAMWORK!

The player exiting the game must “high five” with each member on the bench before picking up their water at the end of the bench from the manager. After that, they should return to the available seat next to an assistant coach to receive feedback on their performance.

Players should never be allowed to go to the end of the bench to sit after coming out of the game. This will only allow the player to disengage from the team and think of themselves. The player will invariably start to ask themselves and others questions as to why he got taken out of the game. Also, by going to the end of the bench, the assistant coaches cannot give them the proper feedback that can be helpful to the player and, more importantly, the team.

Players need to be vocal, especially when the team’s defense is in front of their bench. This is a great way to get engaged in the game and have a positive impact. Communicating from the bench is equally as valuable as the communication taking place on the court, provided that the communication is the same, and it benefits the team.

When a timeout is called, the players on the bench should sprint out to meet the players who are in the game. However, do not cross half court because this is a rule violation. Whether the situation is good or bad, the team must remain a team and handle everything as a single unit. Furthermore, it sends a message to your opponents that they are playing a TEAM and not a collection of individuals.

Another aspect of the game of basketball that often gets overlooked, and is often mismanaged, is timeouts. You can easily identify the most successful basketball teams by the way that they use their timeouts. Their structure and organization allow for the maximum amount of necessary information to be disseminated during the timeout. As soon as the ball is put into play, you will know right away how much of the information was retained. Winning teams can execute at a high level after timeouts (ATO).

Each team is given the same number of timeouts per game. However, how they are used and when they are used often has a big impact on the outcome of the game. I love the rules that the NBA and FIBA use regarding timeouts in their games. Both of these leagues place a high value on timeouts, making their respective games more interesting from a tactical standpoint.

There are two types of timeouts in the College and High School game; the 30-second timeout and the Full timeout. Each must be handled differently by the coach so that the timeout is maximized positively and not wasted.

For a 30 second timeout in basketball, the players in the game must remain standing up and on the court, and the players not in the game must remain off the court. It is imperative that the players in the game SPRINT to the bench area just inside the court. A great way to organize your basketball players is to have them stand in front of the coach by position from left to right (players right to left) 1-5 (pt. g, g, sf, pf & c). By lining up this way, the coach does not have to look around for each player. He can talk freely because he knows exactly where each position/player is in the huddle. This will help to maximize the 30-second timeout and will better help each player to understand what their responsibilities are.

Because these timeouts are longer, they are going to look a little different. Here is a great way to set up your full timeouts.

The managers will hand out the towels and water bottles to the players. While this is happening, the coaches are meeting away from the team to discuss strategy. When the head coach is ready to address the team, all water bottles and towels are taken away by the managers so that the players can give the coach their full attention. The players will sit in front of the coaches from left to the right 1-5 again.

Also, every coach should have a role during the timeout. One coach should know the foul and timeout situation. Another coach should watch for changes in the opponent’s line ups and ready the team for potential new matchups. The coach responsible for that game’s scouting report should assist the head coach the most during timeouts because they are the most knowledgeable of the other team. The head manager’s role is to help get the team out of the huddle after the first horn sounds.

Winning is hard! Consistently winning is even harder. The basketball teams that consistently win have a bench procedure and can effectively manage timeouts during the course of a game. They understand the impact that both aspects have on the game. You can clearly see the difference between a winning basketball team’s bench and that of a losing team. Just watch how engaged their bench is during the game, and look at how the players coming off the bench perform.

Finally, look how well they execute after timeouts when they need a big buck or must come up with a game-saving stop. Winning basketball teams can get the most out of their bench and their timeouts, and it is one of the key factors that allows them to win close games.