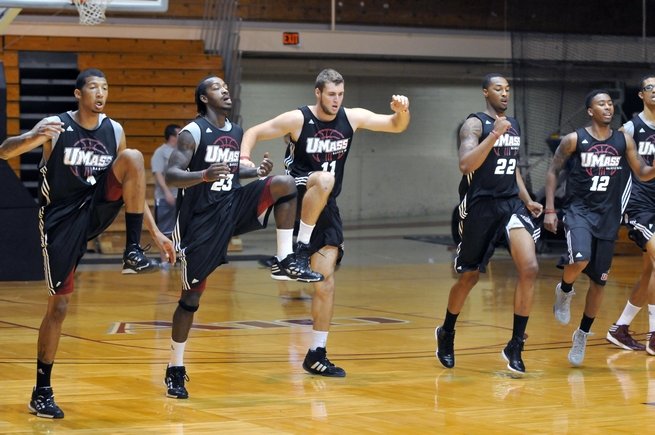 When the basketball season is fully underway, and there are multiple games each week, there are only so many hours of practice time available for your team. With these limited hours, you have to find time to work on all of the different upcoming game plans, basketball plays, etc., and sometimes team skill development falls to the wayside.

You don’t have to spend a lot of time doing basketball drills during your practices, usually 15-20 minutes should be enough. A big point, though, is making sure that all of your players are involved during the drills and that they are going at game speed. If most of your players are standing around while only 1-2 players are actively participating in the drill, it is no good.

Use Stations to Work on Specific Basketball Skills

Not every drill is going to benefit each of your players the same way. For example, post-move basketball drills aren’t going to benefit your point guards the same way that it would your post players. That is why you should try to do stations if you can or break your team up between posts and guards. This way, your players will be able to work on skills that are specific to their position.

A great way to maximize time in your basketball practices and help your team improve is to do game situation drills to cover a specific action that you will use within your team’s offense. If your team uses a lot of ball screens within your offense, you may want to spend time going over using a ball screen, the different reads, and then let them get a lot of repetitions using it.

For this type of basketball drill, you could involve the posts and guards because they are both involved in the action and will be able to work on their specific part of the action.

Have your line of guards start on the wing, just above the free-throw line extended, each player with a ball (or at least the first couple). The post players are going to start on the opposite block. Finally, there will be a coach at the top of the key who will be the passer.

When the drill starts, the first post player will sprint up and set a screen for the first wing player in line (slightly round the angle to the screen). The wing player will come off the ball screen and shoot, drive, or pass it to the spacing/rolling post player. After the wing player makes his move, the coach will pass to whichever player didn’t end up shooting the basketball. Both players will get their own rebound, and then the next players in line will go.

*The coach can predetermine what type of screen it is and whether the post player rolls or spaces after the screen. The team can also be broken up into two groups to get more repetitions (opposite ends of the court).

Whether it is doing basketball dribbling drills, basketball shooting drills, or whatever. You need to make sure that the drill is being done at game speed and with game intensity. Don’t let your team waste valuable time by only going half-speed or goofing around during the drills. Remind them that they could be doing something else less enjoyable with this practice time, and if they are not going to go full speed, you will move onto something else.

Hopefully, you can now see the value of making sure that you are doing basketball skill development in your practices and ways to weave them seamlessly into your existing practices. Remember, they don’t have to be done for very long, and the time you give up will really help your players keep their skills sharp in season. Basketball practice drills are also a great way to break up your practices to help keep your players mentally engaged and motivated.