Getting More Out of Your Basketball Players 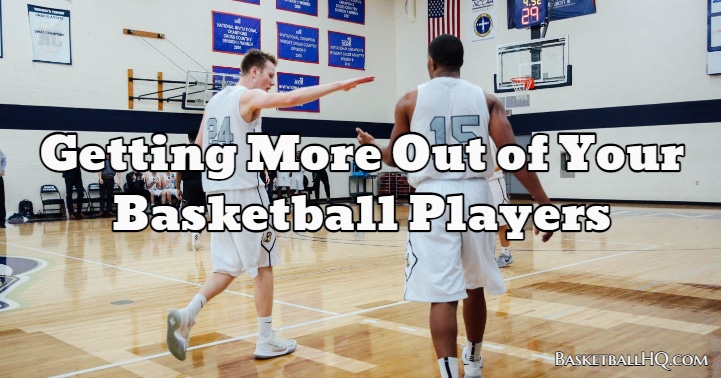 This basketball coaching article was written by Ben Thompson.

Often in coaching basketball, we get frustrated with our players for their lack of heeding our instruction or what seems to be their apathetic understanding of what we have tried to communicate to them. And while it may be partially our players’ faults, we as coaches, need to make sure that we are handling things on our end.

This basketball coaching article will provide you with several ways that you can get more out of your players, and how you can lower your frustration levels at the same time.

Communication With Your Basketball Players

One of the biggest issues in any relationship is miscommunication; this is especially prevalent in a player and a coach’s relationship. As coaches, we tend to assume that our players know what we mean by our use of terminology, concepts, and philosophy. However, when things do not go the way we plan, our frustration levels rise.

This comes back to our lack of communicating what we really want and our players being too timid sometimes to ask questions for fear of ridicule or embarrassment. Every player that we coach comes from a different background, area, coaching philosophy, and terminology set; because of these differences, we must be clear and concise in what we teach.

One of the coaches that I’ve worked for in my basketball coaching career would always use the phrase “you don’t know what you don’t know” to our players. He made the point that what the players previously perceived as working hard would not yield positive results at this level, and their perceptions of working hard needed to be redefined.

Once the players understood this, we could then teach and show them what playing hard really was and what their level of execution and commitment needed to be.

Now that we have opened the lines of communication with our team and explained things clearly and concisely, the problem arises of how to teach them what we need them to learn and what they need to understand. I have bought into the philosophy that things need to be broken down into the simplest form to teach. However, I was taught and have held to a certain belief and way in which it should be done.

Go with three people, then with four, then with five, until you have built back up to the whole. After you have built up, run shells and dummy offenses; then, add the opposing players and play with what you’ve taught, correcting as you see mistakes and reminders.

Now that you have built your foundation and explained it, players will understand the why’s and how’s of what they are doing. Whatever your philosophy or system is, it must be taught efficiently and effectively to work; “It’s not how much you know, it’s how much they know.”

You can have the greatest system in the world and be the most knowledgeable coach; but, if your players don’t understand and know how to execute that system and shared knowledge, it will all be for naught, and your system will not be successful.