Intensity in Your Basketball Practices 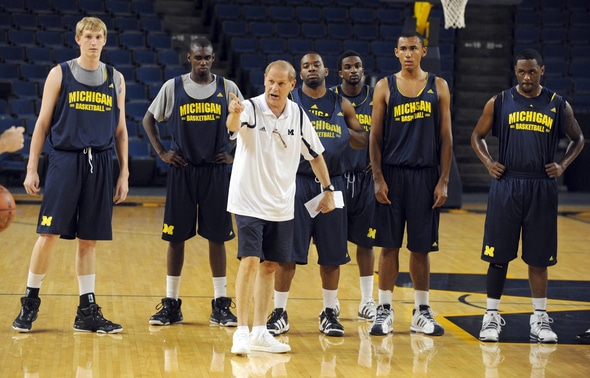 This basketball coaching article was written by Russ Willemsen.

We all expect our basketball teams to play at game speed and compete on every possession in practice. We want our intensity in practice to be up where we know it needs to be to get better and to win games. One of the biggest questions other basketball coaches ask me is, “What do you do to make practice more intense?”

In my opinion, intensity and work ethic can be improved, just like shooting or ball handling. Yes, there are those occasional student-athletes who do not respond, but I have learned a few things that can help make practice more intense.

Some of these strategies we use at Tennessee Tech, and some I have seen used at other schools. In both situations, a coach is a catalyst for raising the intensity in your basketball practices.

Communication in Your Basketball Practices

Kevin Eastman with the Boston Celtics said that communication does these six things for their team:

This includes demanding that your players become coaches from the sideline. For instance, if your team is working on a standard shell basketball drill, have the players waiting in line communicate to the player on defense.

One of the biggest questions I get from our guys on communication is, “What do you want me to say?” Assign them specific roles and a vocabulary to use, and hold them accountable. The players in the lines will grasp the concept sooner if they are coaching those in front of them.

Using a variety of basketball drills can also help make practice more intense. Players get bored doing the same drills; sometimes, making one little adjustment to a drill can help ignite that segment of practice. For instance, say your team does a three-man weave every day for three minutes. The next time you do that basketball drill, give them a goal of made layups without a miss. This will help to keep them focused and also promote accountability in your basketball practice, and with your team.

Competition instinctively promotes an intense practice. Like Herm Edwards said, “We play to win the game.” Every drill should have a winner and a loser, including a consequence for the losing team. We started this at Tennessee Tech, and it’s amazing how much harder kids will play when something is at stake.

However, the consequence must mean something. For instance, losing a competition basketball drill and running a down and back will not really affect players. On the other hand, losing and running a timed suicide is much more difficult. The suicide is harder and only takes roughly 30 seconds, so it does not cut into practice time.

When practice does seem to lag or become dull, have a “go-to” basketball drill to run. Most teams have basketball plays that they will run when they know they need a bucket. Practice should be the same way. Implement a team basketball drill that you know can help your players get back on track when practice seems monotonous.

When I coached basketball at Lee University, we had two clocks set up for practice. One had the total time left in practice, and one had the total time left in that drill. One positive our team gained from this was knowing exactly how long they had to practice. They were intense for that specific amount of time. There are pros and cons to this idea, but it is an alternative method that helps to generate pressure and intensity in practice.

Your Level of Coaching Intensity

The final way to facilitate a more intense practice falls on the shoulders of the coaches. Basketball coaches themselves play a role in keeping practice intense. It is a coach’s responsibility to strategically plan out a practice that promotes all of the stated techniques and be intense themselves. Players love when coaches sweat with them. How can a player not give their all when their coach is?

I firmly believe that basketball teams take on the personality of their head coach. If you want more intense practice, learn to become more intense during practice. These ideas are a collaboration of many people’s beliefs. Again, some of these we implement at Tennessee Tech and others we do not.

A coach must still teach and coach to his personality, but I hope that the ideas in the basketball coaching article are helpful.